If you live in heavenly surroundings, you’ll want to make the most of them! Discover the story behind this gorgeous redeveloped estate.

Perfectly situated on the North Norfolk coast is Bliss Blakeney, a stunning new-build home happily inhabited by Lisa Lipscomb, her partner Daniel Broch, their two children Myla and Edith, and their two dogs Chilli and Maple. As the name suggests, ‘Bliss’ perfectly captures the look, feel and character of the beautiful, Blakeney-based home.

Before Bliss Blakeney came to be, the site contained a 1950s house and outbuildings that were plainly out of touch with the area. When they first saw the existing house for sale, Lisa and her daughters went to investigate while Daniel was away in Scotland. It was the view that ultimately captured their hearts, which is no surprise as the home boasts spectacular views of the North Norfolk coastline, sea and salt marshes. “Daniel asked if the view was what he thought it was,” says Lisa. “I said yes, and so we bought it by sealed bid without him even having a viewing.” 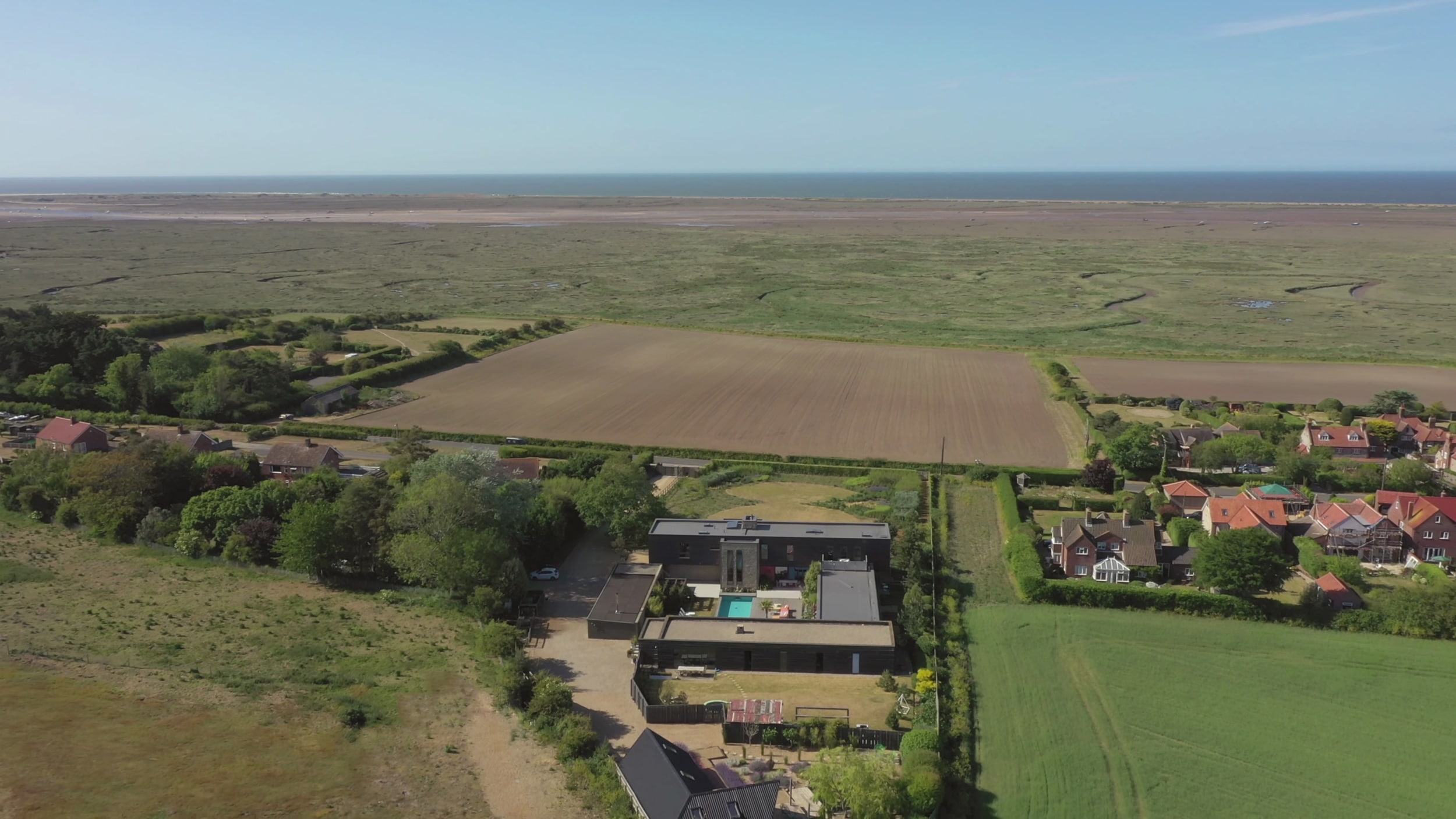 “When we both saw the plot we felt confident – we were ready for a project that would push us a bit”. With extensive experience in property development, Lisa and Daniel were ready to take on the challenge – building their own family home. And so began the work.

Before building Bliss, the family resided in the existing 1950s house for a year to truly immerse themselves into the location and experience it in all seasons, taking into consideration the weather, the humidity, the salt from the sea air: “We lived in the original house and worked out how to make the most out of the land and space, and decided what the layout should be and where things should go.” 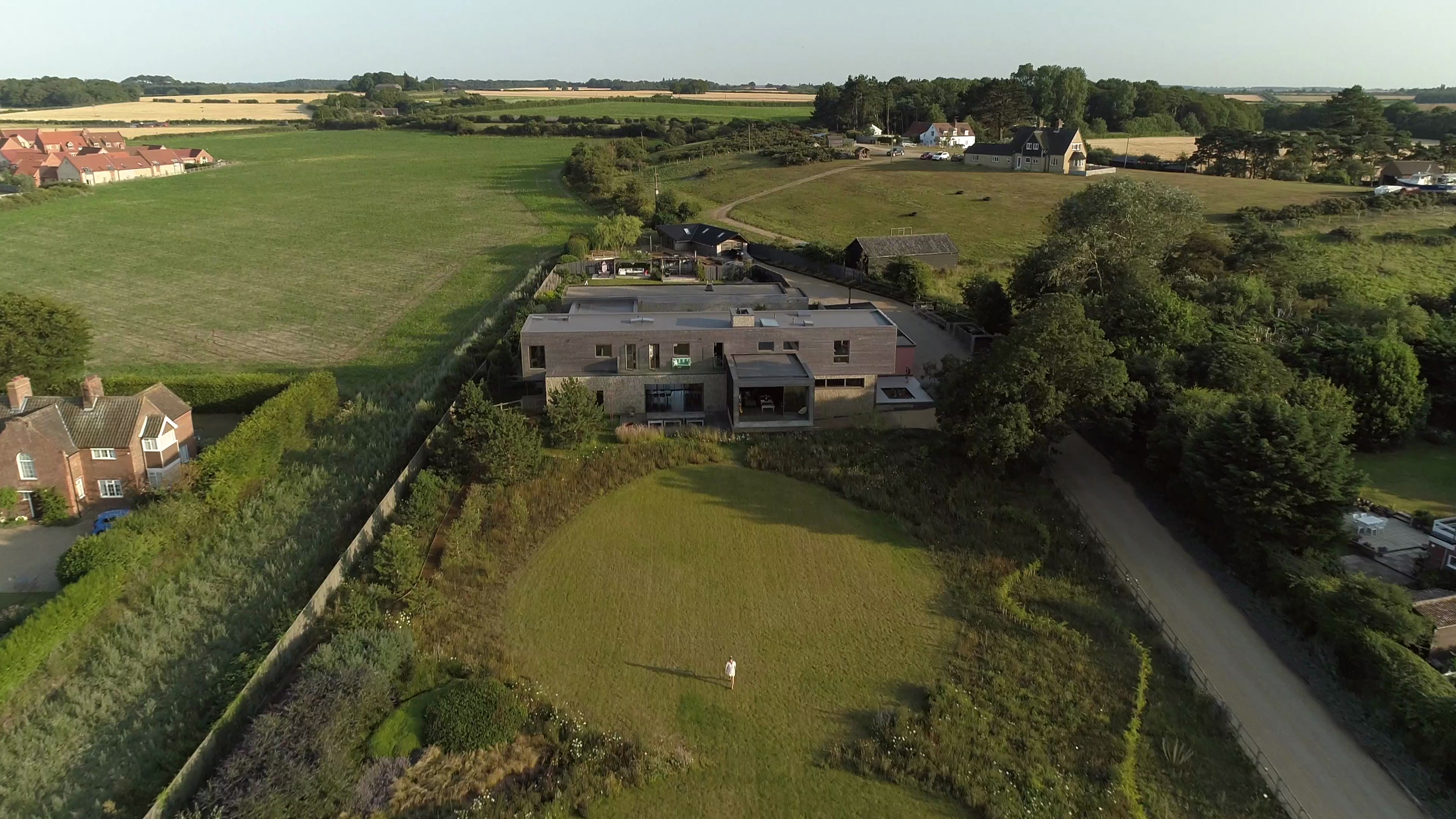 Having previously worked with him on several projects, Lisa and Daniel chose Anthony Thistleton from Waugh Thistleton Architects, to help make their dream a reality. With Anthony on board, they put together a detailed plan of how they wanted to live in the house and move around the space.

“The last houses that we built together were London-based, and they became the first CLT (cross-laminated timber) residential houses to be built in the UK,” says Lisa. CLT is a sustainable building material consisting of planks or boards of sawn, glued, and layered wood (usually spruce or pine). Each layer is oriented perpendicular to the previous layer, making it a strong and versatile building material.

Building on their previous success with CLT, they once again turned to this innovative material for Bliss Blakeney. The home’s structure was precision-engineered off-site and delivered flat-packed.

CLT is not commonly used for residential properties in the UK, although it is popular in mainland Europe – known mainly for its unique appearance and sustainability. The CLT used to build Bliss was sourced from a factory in Finland that produces the material by burning offcuts and planting trees to replace everyone it uses.

As it arrived ‘ready to construct’, the main part of the house took just seven weeks to build. 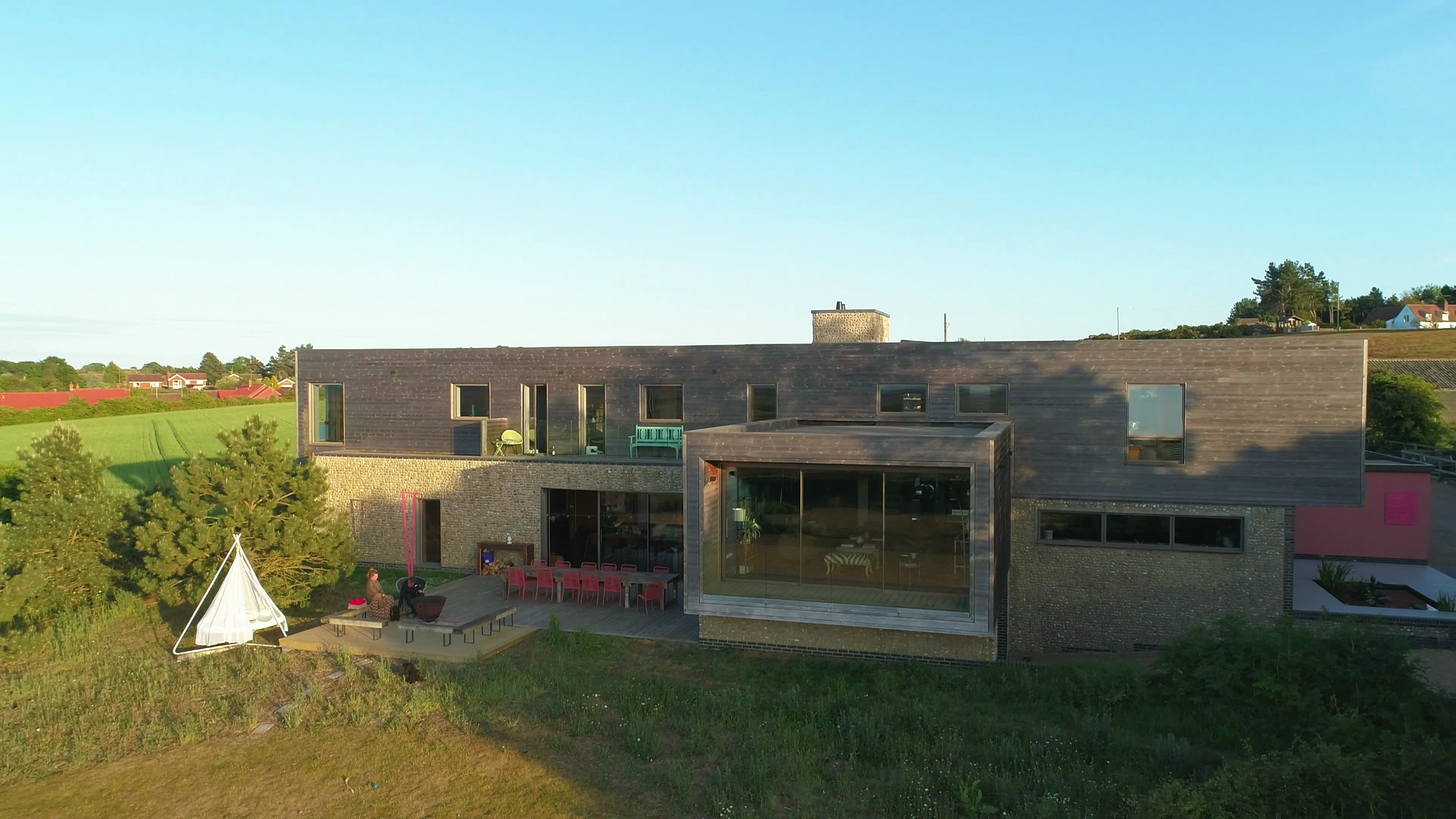 The family decided to build an impressive four-bedroom ‘mini’ home on their land to stay in while the main house was being built.The Cabin, which is now a gorgeous getaway for holiday-makers, was also created off-site using CLT and took only three days to construct. 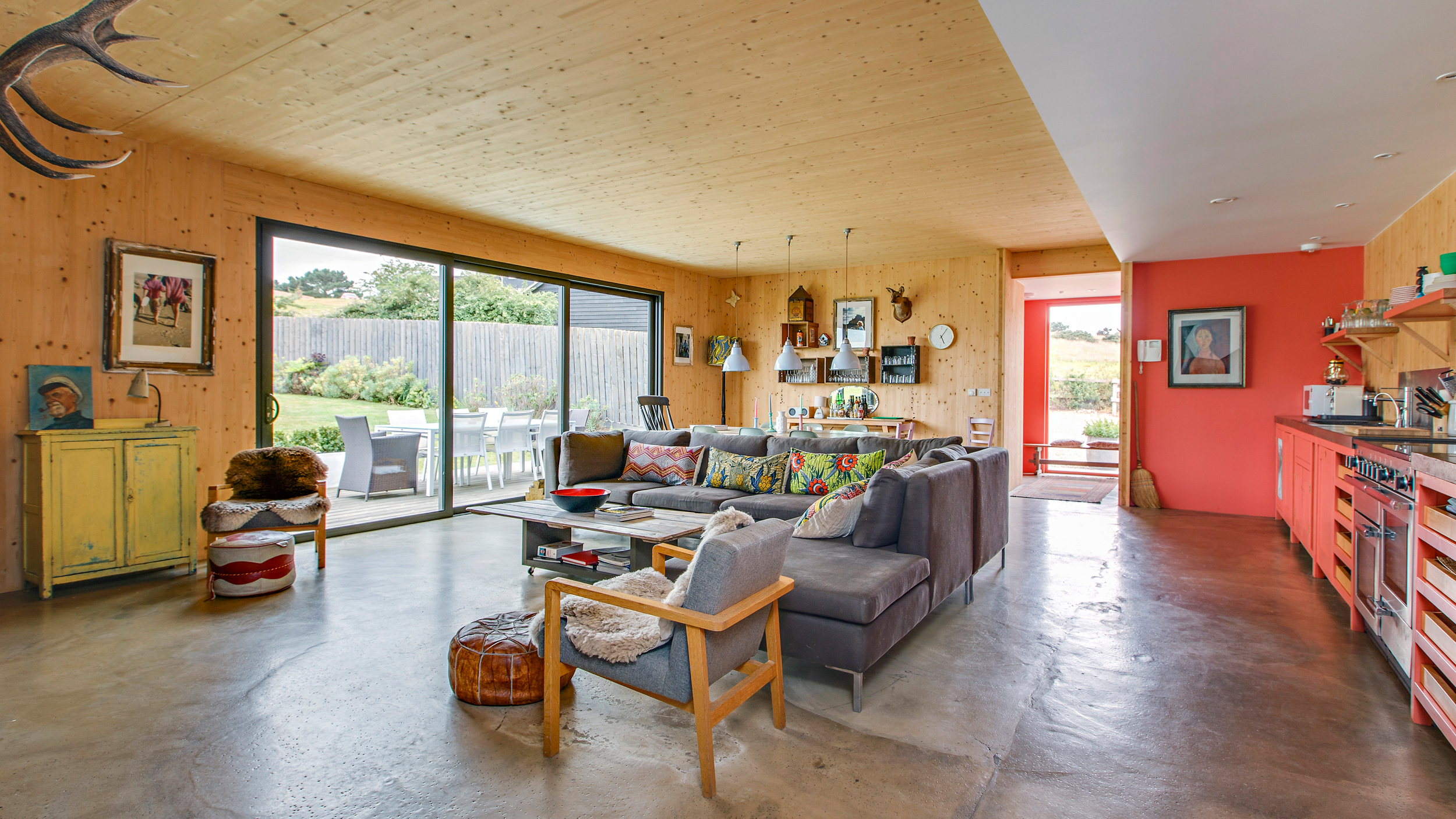 After staying in The Cabin for six months, they “moved into the main house and lived in it, breathed in it, and were consumed by it,” explains Lisa. “We were the construction company, and so we all knew our strengths and we allowed each other to do our bit. Construction was Daniel’s department and finishing was mine so it worked well.

“And then slowly but surely we worked our way through the house. It took a while to finish because there’s a lot of high-end joineries, which takes a lot of time. Everything is bespoke and every finish is carefully considered – it was a labour of love.

“You could say that the kitchen-living area is one of my favourite rooms, because of the openness,” says Lisa. “When you pull both of those doors back, you can move through the room from the courtyard to the front of the house, which really is special.

“That’s probably IDSystems’ big tick – creating something that’s no longer just a room but that feels like a canopy, just a roof and no walls. It’s amazing.”

The kitchen is light and spacious, featuring vibrant coral-coloured walls and ceilings. The living area features slightly darker tones yet welcomes the light thanks to IDSystems’ sleek ultra-slim sliding doors.

The open-plan layout coupled with the cosiness of built-in fireplaces and log burners make the house perfect for all seasons. 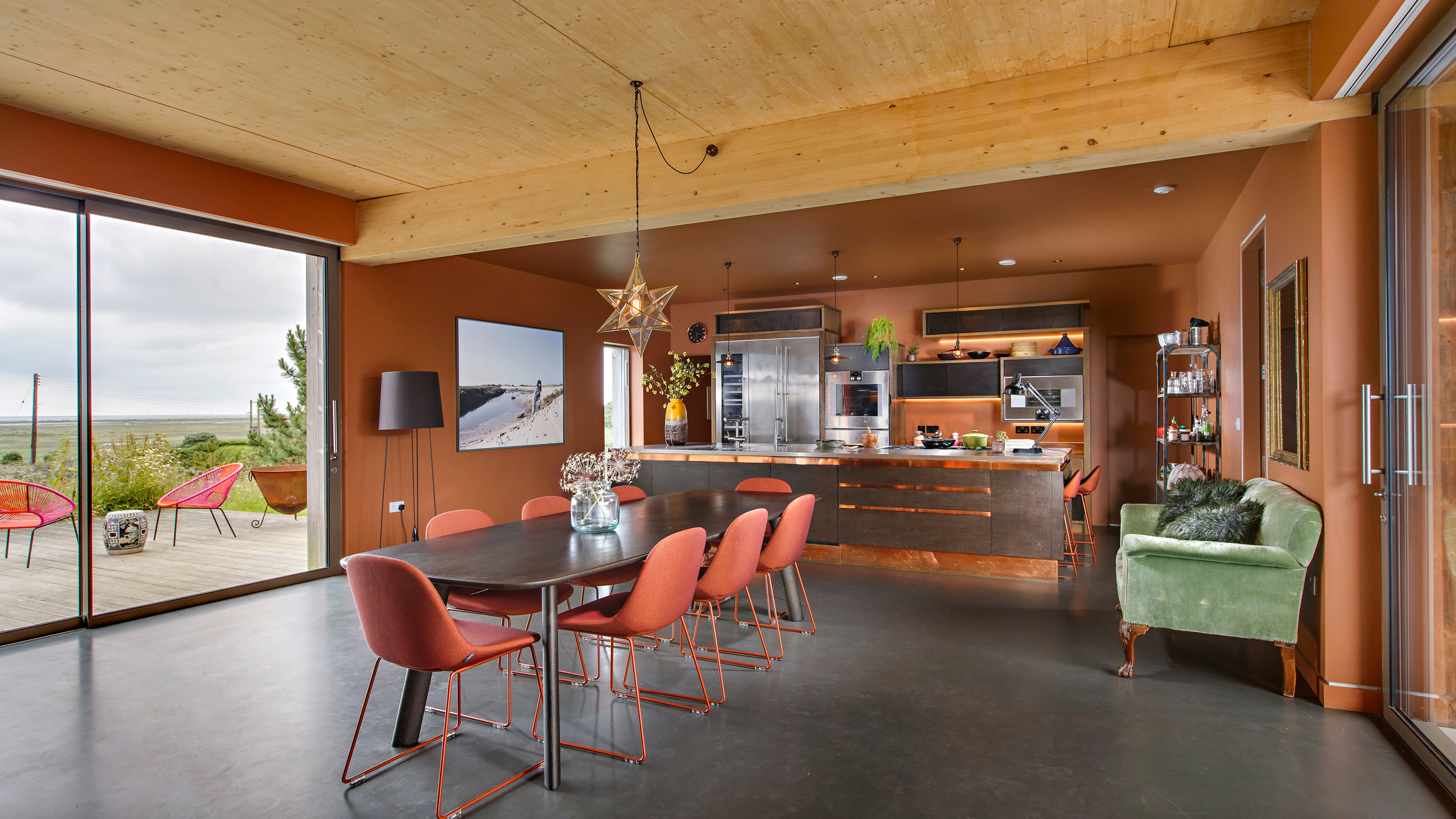 Another interesting aspect of Bliss is the courtyard, which features a pool, palm trees, and a lounging area, evoking that perfect holiday feel.

“The courtyard is my favourite ‘room’ even though it’s not a room at all! I think the courtyard is quite a unique thing to have in a home – to live around a garden and have all your doors open out into a garden with a pool and palm trees is unusual.” 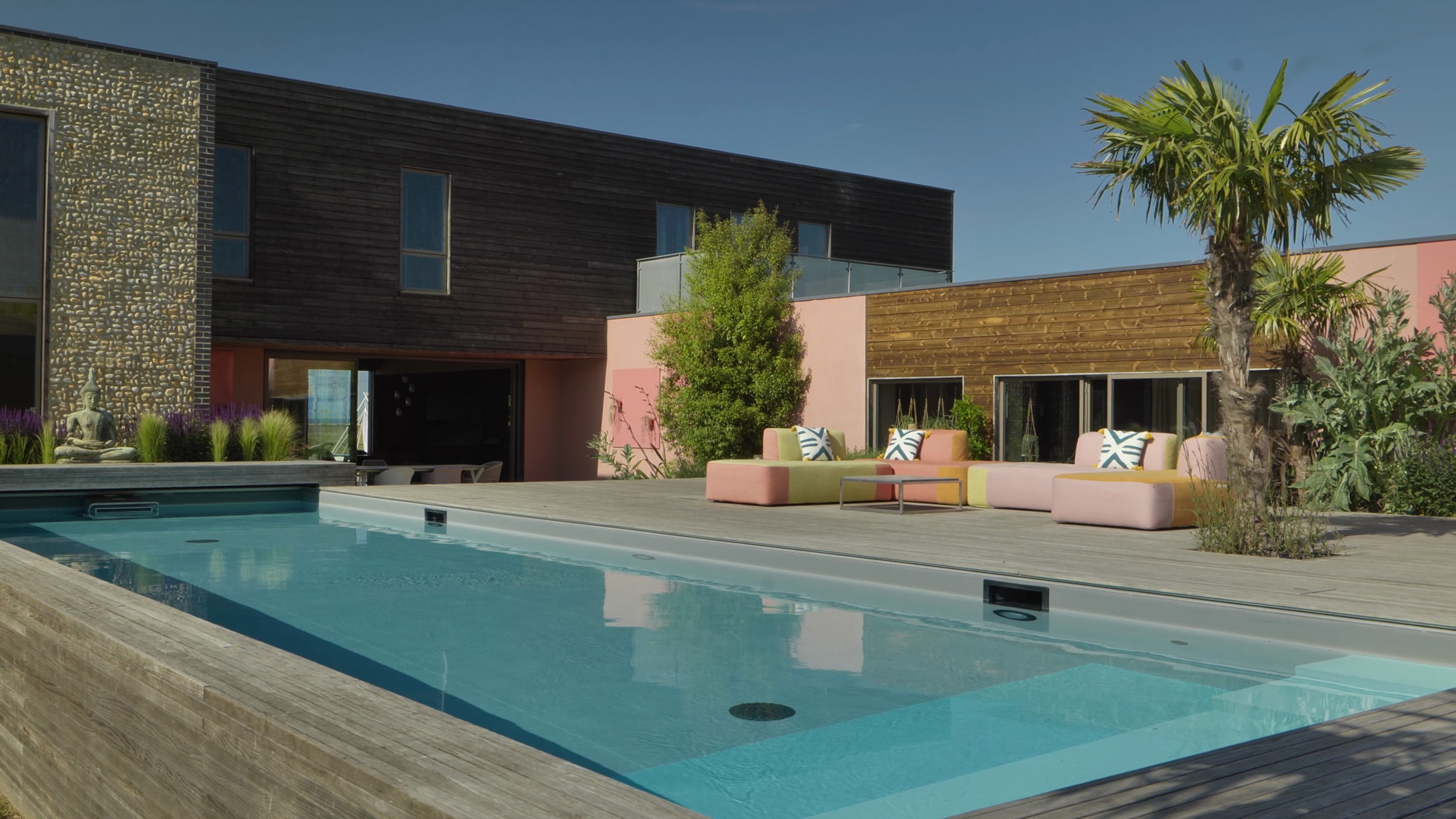 The courtyard isn’t the only “unusual” feature of this incredible home.

“We have a spa area as well as a steam room, treatment room, gym and a little salon because I was originally a hairdresser in the West End,” says Lisa, “We also have a beautician who comes and does treatments.

“We wanted to live in the countryside but with all the facilities you can have on your doorstep in a town or city. So, while we live remotely, we’ve made sure we’ve got all the things we could ever want – and way more.”

A tribute to Everyman

The home also features a cinema room and for good reason too. Lisa’s partner, Daniel Broch, is the founder of Everyman Cinema, a highly successful, luxury boutique cinema chain.

“Everyman Cinema was like our baby and she grew up and we wanted to bring her home, so the cinema here is our little nod to it,” says Lisa. “Without Everyman, we wouldn’t have got here, so our cinema room is a little bit nostalgic.” 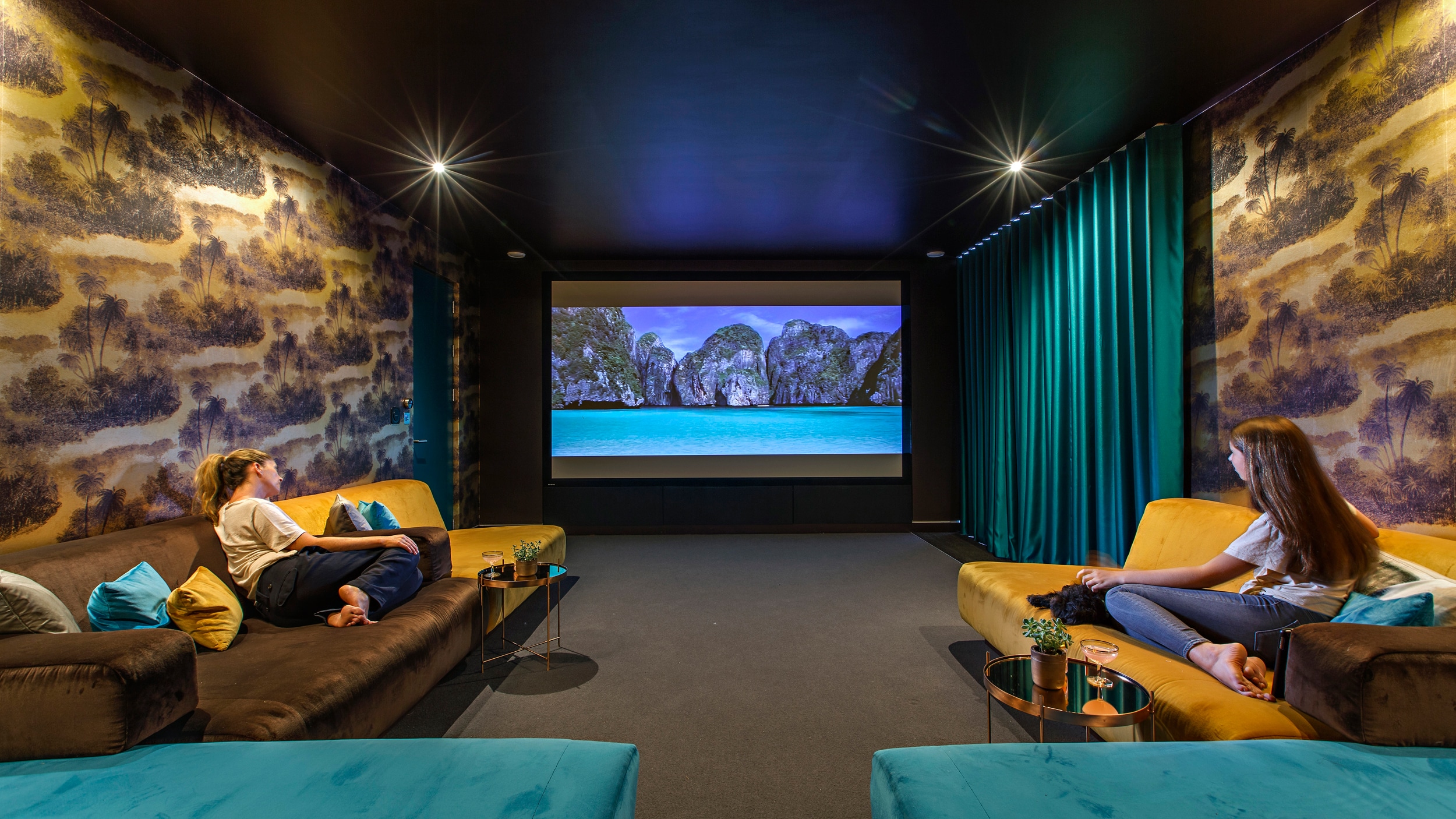 Letting the light in with slim sliding doors

“The best decision for the design of the house was, without doubt, the light. None of these rooms would have the drama without these huge windows that I can just open up and have an inside-outside room,” says Lisa.

“We live right by the sea and we wanted to see it from as many windows as we possibly could. And the bigger the better.

“These windows frame the view like a piece of art. Every day I get something new”

“When we saw that IDSystems had a slim frame that really was a game-changer for us. We needed everything to be stunning and beautiful and light, and almost like you’re not even aware there are windows. To be honest, it’s the lightness of the design that won the day.”

The home features theEDGE2.0 ultra-slim sliding doors to enhance the gorgeous view over the salt marshes and estuary. The three-panel sliding doors perfectly frame the view of the coastline, with two further sets of theEDGE2.0 included within the main living/dining room, one on to the decking area at the front of the house and a second into the courtyard.

Edward Stobart, Sales Manager at ID Systems adds: “The biggest challenge on this project was the location – being so close and so exposed on the coastline would cause issues for some competitors’ door systems because they do not offer as good protection from wind and rain.

“The salt in the air also can cause issues with the paint work on aluminium doors so the doors needed a marine-grade paint finish to protect them. The fact that nearly seven years on from installation they still look as amazing as they do is a testament to the products quality in even the harshest of environments. If they can survive and still work perfectly in that location then a customer buying a set of doors for a (more typical) London extension project can be reassured that their doors will last.”

The open-plan design and innovative use of glazing minimise the energy usage by creating a light-filled home, encompassed by breathtaking scenery.

“Rooms are a little bit boring, really – it’s all about the view. IDSystems gave us our views, which are spectacular because at the front we’ve got the sea and then we’ve got the courtyard. So, rooms? You kind of spend your life staring outside rather than inside,” explains Lisa.

“My favourite time of year in the house is all year round because these windows frame the view like a piece of art. Every day I get something new.”

Since the creation of Bliss Blakeney, Lisa has developed a strong passion for interior design and has recently started her own business: “ I’m now starting a company to help those buying second homes with their interior design. So, that’s a new kind of venture for me. I was always interested in interior design and I think this house just pushed me to another level. I suppose a passion has become more of a business.”

Lisa also worked on the interior design for the family’s other business, Bliss Hotel, an impressive waterside development located in the coastal resort of Southport.